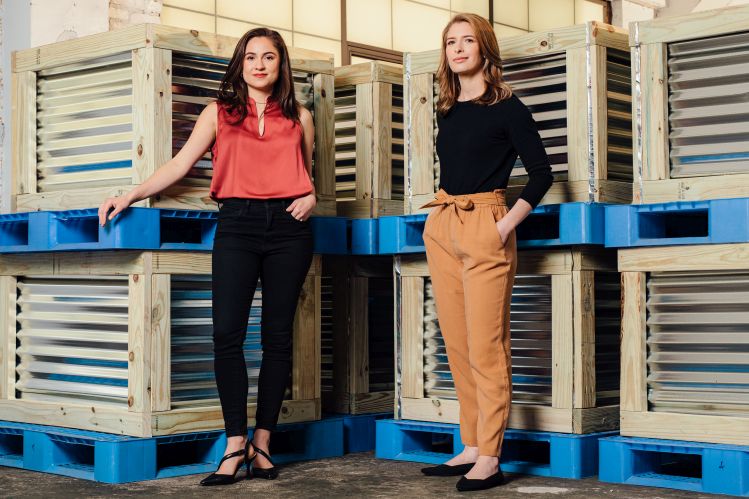 What feedstocks will power the next wave of microbial fermentation? Hyfé Foods, the high-protein ‘mycelium meal’ start-up, turns to the ‘gold mine’ of wastewater…

Right now, says Ruiz – a former ExxonMobil chemical engineer who last year teamed up with LanzaTech biochemist and patent agent Andrea Schoen to make high-protein gluten-free “flour” at from mycelium-fed sugary wastewater – companies typically feed their purified microbes sugars such as dextrose from food crops such as corn, which have their own environmental and economic costs.

As a result, explains Ruiz, the race is on to find a cheaper and more sustainable approach to recovering industrial and agricultural waste streams; extracting cellulosic sugars from non-food crops; to find microbes capable of completely avoiding sugars and converting the carbon in the air into proteins (Air Protein, Solar Foods).

‘What is my purpose in life? Don’t make ExxonMobil more money…’​

For Ruiz, who takes the first approach (upcycling industrial and agricultural waste streams), his career shift from the oil industry to food was driven less by an “a-ha” moment than by a realization fledgling that its skills could be put to better use.

“I ran a sewage treatment plant that used bacteria and fungi to eat the organic matter in it. This is how water is purified. These microbes were growing like crazy, so we were throwing the biomass in the landfill, thousands of pounds a day. Do you know how much methane we were producing? ​

“What is my purpose in life? Don’t make ExxonMobil more money. And I started thinking, wait a minute… This site is a fraction of the size of some of the food manufacturers, so think of all the waste water ​[packed with sugars ideal for feeding hungry microbes] that they produce. ​

“We​ have millions of gallons of mostly sugar water that brewers or wet corn mills produce as wastewater, and they have to pay surcharges to manage it because it’s so high in sugar,” adds Ruiz. “So I thought why can’t we use it?”​

“Do you know how much methane we were producing? »​

The food system accounts for 70% of all freshwater use, says Ruiz, who just raised $2 million in a pre-seed funding round* led by private equity firm The Engine. risk from MIT.

If you can use recycled water feedstocks, you can reduce the water intensity of fermentation, but also divert those feedstocks from wastewater treatment facilities, which generate significant amounts of methane, adds- she.

But if it’s so obvious, why isn’t everyone in the booming microbial fermentation space doing it?

“These are two different things, but for many companies in this space it comes down to which technical challenge do you want to overcome first,” she pretends.​

“I’m a chemical engineer who used to work in wastewater treatment, so I know there are certain wastewater streams that aren’t coarse; they are not contaminated, they are pure gold. But you have to know what you’re doing and there are a lot of barriers to entry, so I understand why companies ​[pioneering work in microbial fermentation for food] said​ [in the first instance] we will start by buying raw sugar ​[and then down the road explore other sources of glucose].”

As for intellectual property, she says: “For us, the differentiation is very much based on the recovery and pre-treatment phase of this whole bioprocess. ​

“The interesting thing about pre-treatment is that it can be done continuously, but I can’t say too much about ours at this time. The pre-treatment train is designed to maintain exactly the same conditions for the feed entering the fermenter, so the mushrooms have stable growth conditions.”​

“If you wanted to make pasta with pesto, you don’t need to add chicken because it has as much protein as a piece of chicken with a bowl”​

So what kind of food production facility generates the kind of constant sugary wastewater that could fuel Hyfé Foods’ fermentation process?

“Wet corn mills, industrial breweries and canneries have a pretty good amount of water”, said Ruiz. “And anyone who’s blanched vegetables is just boiling them, so that’s nutrient-rich water that can be used. We will not supplement with more sugar as these feeds are very concentrated. That’s why I think they’re just a missed opportunity.”​

When asked about the microorganism Hyfé Foods works with to make its “flour”, Ruiz points out that it is “100% different” ​from the strain of mushrooms marketed by Meati Foods as a meat alternative, and has a fairly “neutral​ to taste“although she is”trying hard to make sure it didn’t taste like anything.​

“We don’t want a stringy, meaty product. We have​ [got a product with] about 50-60% protein and 25% fiber but we’re still working on it so I can’t say what the exact nutritional composition is but we’re focusing on flour that people can use as a direct substitute for flour wheat without the refined carbohydrates.​

“It also happens to be very high in protein and so if you want to make pesto pasta you don’t need to add chicken because it has as much protein as a piece of chicken with a bowl. .”​

When asked how confident she is that there is a market for “mycelium flour”, which most consumers won’t recognize and likely won’t have the same properties as wheat flour in all applications it states:

“I think there’s a really great story we can tell about fungi being around since the dawn of time, so that’s the storytelling we’re probably going to lean into. I also think we can ​[use the term] ‘mycelium.’​

That said, Hyfé Foods is still in its infancy, acknowledges Ruiz, who says the ultimate plan is to sell both “flour and formulated flour products to CPG companies, restaurants and convenience food companies.​

“How do we process the mycelium so that it remains minimally processed, but also meets the goal of looking like flour? It is also part of our development plan to work on the drying and deactivation process without using heat.​

“We are recruiting a fermentation scientist and a process engineer, and we are working with the Argonne National Laboratory ​[a Dept of Energy multidisciplinary science and engineering research center neat Chicago], to scale up to pilot scale as quickly as possible. »​

*Other investors participating in the pre-seed round include: Blue Horizon, Caffeinated Capital, Supply Change Capital, Lifely, Gaingels, Hack Ventures and angel investors including restaurateurs and founders. Hyfé also received a grant from the Department of Energy through the Chain Reaction Innovations Accelerator at Argonne National Labs.