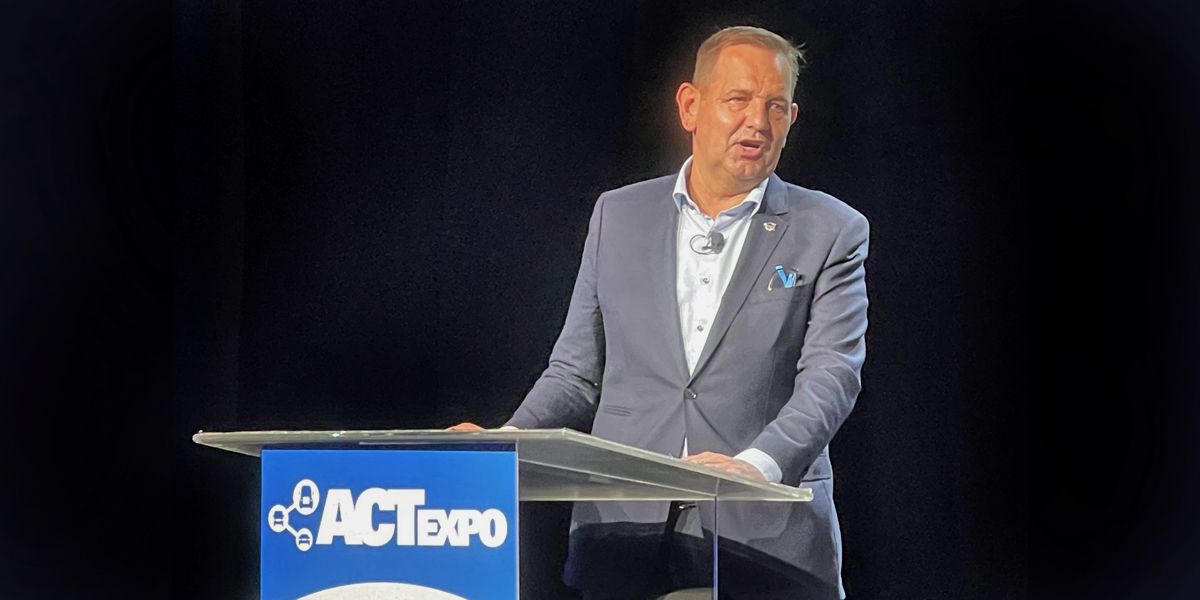 There is a definite sentiment in the air at the Advanced Clean Transportation exhibit in Long Beach, Calif., This week. It’s not electricity, exactly. More like the feeling that electricity – or battery power, to be precise – has finally arrived in trucking.

For several years, equipment manufacturers and technology start-ups have presented battery trucks as a reliable alternative to gasoline and diesel trucks. But until now, it seemed like these discussions were mostly academic and focused on an era that still hovered just above the horizon.

Now the feeling in Long Beach is that that moment has arrived.

Erik Neandross, CEO of Gladstein, Neandross and Associates, the company that owns and operates ACT Expo, opened the show on the morning of August 31 by speaking to attendees about the accelerating technology calendar for electric trucks, and concluded his session with a one-on-one chat with Peter Voorhoeve, President and CEO of Volvo Trucks North America.

Voorhoeve said the Swedish truck maker is aggressively stepping up its electric truck initiatives. Citing a new “sense of urgency,” he said Volvo is committed to having a 100% zero-emission range of utility vehicles by 2040.

Neandross started the discussion by laying the groundwork for the electric truck movement as it presents itself in the closing months of 2021.

He noted that across North America, the regulatory front for electric trucks is rapidly escalating, citing a new internal combustion engine ban in Canada, which would also come into effect in 2040.

“The second element is the incredible commitments that we are seeing from big companies like Pepsi Cola, Amazon and Walmart, all of which are making huge commitments to move towards zero-emission supply chains by 2050,” he said. added Neandross.

Moreover, said Neadross, the huge sums of money invested – billions and billions of dollars, now – cannot be ignored and is already showing the results displayed in the new technology and products on display at the exhibition.

“Overall, we are seeing electric trucks starting to become a reality,” Neandross said. “This, to me, looks like the beginning of the end of the era of petroleum-based transportation.”

Develop transport within the limits of the planet

Volvo’s Voorhoeve pointed out that the post-pandemic global economy is rebounding much faster than many experts predicted. Changing consumer purchasing habits, spurred by the COVID-19 crisis, have created even more demand for transportation in the past two years.

“The good news is that there is now more demand for the services and products offered by OEMs like Volvo,” said Voorhoeve. “At the same time, however, our planet’s resources are limited. The question now is how to develop more transport for our industry and our economies within the limits of our planet’s resources? “

Voorhoeve said Volvo is already working to answer this question with real-world products and corporate commitments.

“By 2030, 25% of all new Volvo trucks built will be battery-electric vehicles,” he said. “And – since we all have a responsibility to take care of this planet and hand it over to our children, Volvo is also committed to building a 100% zero-emission vehicle by 2040.”

Voorhoeve also noted a theme that would dominate ACT Expo 2021: the problem of charging infrastructure that electric fleets now face.

“We have electric trucks today,” Voorhoeve said. “But the electric charging infrastructure remains a significant challenge. As we move from diesel to zero emissions, Volvo is working with electric infrastructure providers to understand what the right types of charging equipment are, how much it costs to install these systems, optimizing routes for fleets and the appropriate locations to place the charging stations.

Noting that longer routes would likely require hydrogen fuel cell technology to move to zero emissions, Voorhoeve said Volvo Trucks and Daimler Truck have teamed up to found a new company, called cellcentric, which focuses on the development of hydrogen fuel cell technology. for heavy goods vehicles. Volvo and Daimler will have access to new technologies once they are ready, Voorhoeve adding that he expected to see the first prototypes of vehicles on the road before the end of this decade.

A bigger question, Voorhoeve noted, is how new electric vehicles on Southern California roads can make the leap to a more national and international presence in the United States and North America.

“We are ready to go national with our electric truck products now,” he said. “And we are working with our dealers – who play a very important role in all of this – to prepare other US states to prepare for zero emission vehicles. But not all states are ready to take these next steps. Much of the problem has to do with the government incentives needed to help early customers switch to electric trucks. And the point is that incentives are currently very much based on the willingness of individual states to provide them. “

Voorhoeve said that, like a growing number of people, he agrees with scientists and other climate experts who note that climate change is not only real, but that it is accelerating rapidly as more and more more weather crises are happening all over the planet.

“There is now a realization that private companies have to step in to do something about this,” he said. “And Volvo is answering that call. It is very clear now that things are happening, and there is now a sense of urgency about the need to switch to zero emission trucks, buses and vans. “

Loans Without Credit Checks: Why Avoid Them & What To Do Instead