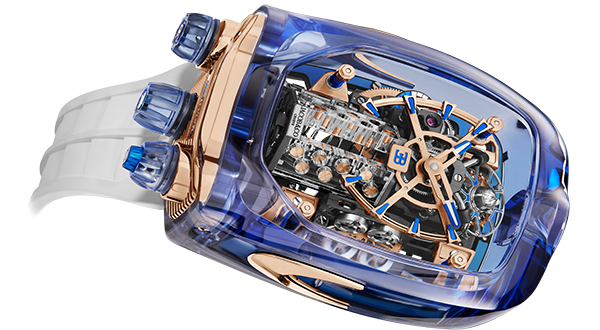 The revolutionary Bugatti Chiron Tourbillon has been designed to honor the legendary Chiron hyper sports car, and in a technical feat, inside the case is a fully operational recreation of the iconic Bugatti W16 engine. The movement powers the timing functions and a 60-second flying tourbillon. When the automation is activated by pressing the right crown, the engine comes to life with its 16 pistons pumping and twin turbochargers spinning, creating an exhilarating visual of a Bugatti engine. Visually, the ultra-sleek tonneau-shaped case is inspired by the flowing lines of the Chiron.

“At Jacob & Co., we always develop luxury watches that no one else can imagine,” said Benjamin Arabov, CEO of Jacob & Co.. “With the Bugatti Chiron Tourbillon watch, we have done something that no one had ever attempted before, to create the world’s first true motor on the wrist.”

The Bugatti Chiron Blue Sapphire Crystal is state-of-the-art luxury, priced at $1.5 million, it features a full sapphire crystal watch case. Accomplishing the working engine and the sapphire crystal case are the greatest achievements in watchmaking. It is the result of months of material processing, high-level machinery and hand polishing to produce a case that exposes every part of the 578 decorated and hand-assembled components of the hand-wound caliber JCAM37, making this shows every bit. as admirable as the car that inspires him.

Adding color to the sapphire crystal further complicated the process of creating the Bugatti Chiron case. However, the end results show that the effort is worth it as the case features a unique blue color while maintaining its transparency. The fully transparent sapphire caseback reveals all the refined details of the 578 hand-decorated and assembled components, including the two separate barrels and ratchet wheels: one for driving the engine and the other for timing. Also visible from the back are many of the 51 jewels used in the movement of the timepiece. From every angle, the Bugatti Chiron blue sapphire crystal case combines fine craftsmanship, high-level craftsmanship and exceptional mechanics.

The Bugatti Chiron Tourbillon is also the very first Jacob & Co. watch to feature a 30º inclined tourbillon, which allows this incredible complication to be admired through the replica of Bugatti’s horseshoe-shaped grille. , the power reserve indication for timekeeping even has the universal fuel pump symbol on the side of the gauge at nine o’clock.

Taking more inspiration from the Chiron, the watch movement is completely suspended in four places, mirroring real automotive shocks. Framing the engine block within the watch are two “exhausts”, completing the engine theme of the design.﻿﻿﻿

The partnership between Bugatti and Jacob & Co. began in 2019 with the aim of creating unique and unprecedented timepieces. These watches embody the spirit and talents of both companies, while taking watch design to impossible heights.

Two timepieces, the Twin Turbo Furious and the Epic X Chrono have been released since the formation of the partnership, both directly inspired by the unique design and spirit of Bugatti hypercars. In 2020, Jacob & Co. and Bugatti introduced new watches in the Twin Turbo Furious collection, and the Bugatti Chiron, an all-new line.