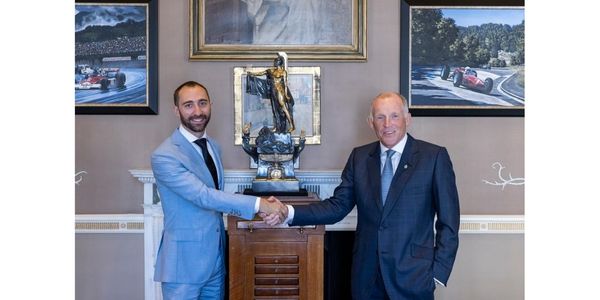 The Royal Automobile Club has presented the prestigious Segrave Trophy to hill climber Robin Shute for being the first and only British driver to achieve overall victory at Pikes Peak.

The nominating committee had chosen Shute to be the final recipient of the trophy – which is awarded to a British subject who demonstrates ‘the spirit of adventure’ – even before he added a third victory at Pikes Peak in June 2022. There are certainly few motorsport adventures that can match Colorado’s dreaded hill climb, which takes place on a 12.42-mile course that climbs through 156 spectacular bends to a elevation of 14,115 feet to the summit finish line. There must be even fewer events where intrepid riders need oxygen.

Speaking at the luncheon presentation, Ben Cussons, Chairman of the Royal Automobile Club, said: “We are delighted to present the Segrave Trophy for 2021 to Robin Shute in recognition of his achievements at Pikes Peak. It was Lady Segrave’s wish that the trophy celebrate those who have shown exceptional talent, courage and initiative, and there is no doubt that Robin did just that by taking on the unique challenge. to become the “king of the mountain”. The fact that he added a third victory this year is even more impressive.

Norfolk-born Shute took his last victory in what was the 100th run of the legendary American hill climb – in the process overcoming cold and wet conditions, as well as thick clouds towards the top. After setting the fastest qualifying time ever for an internal combustion car, Shute was in a class of its own aboard his 550hp, 2.1-litre Wolf TSC-FS, and his time of 10 minutes 9.525 seconds was 25 seconds behind its closest competitor. .

Shute said: “Receiving this prestigious award is a huge honour. There are so many big names among past winners and – as a speed record enthusiast – I have enormous respect for Sir Henry Segrave and all that accomplished. Winning a trophy awarded in his honor is very special.