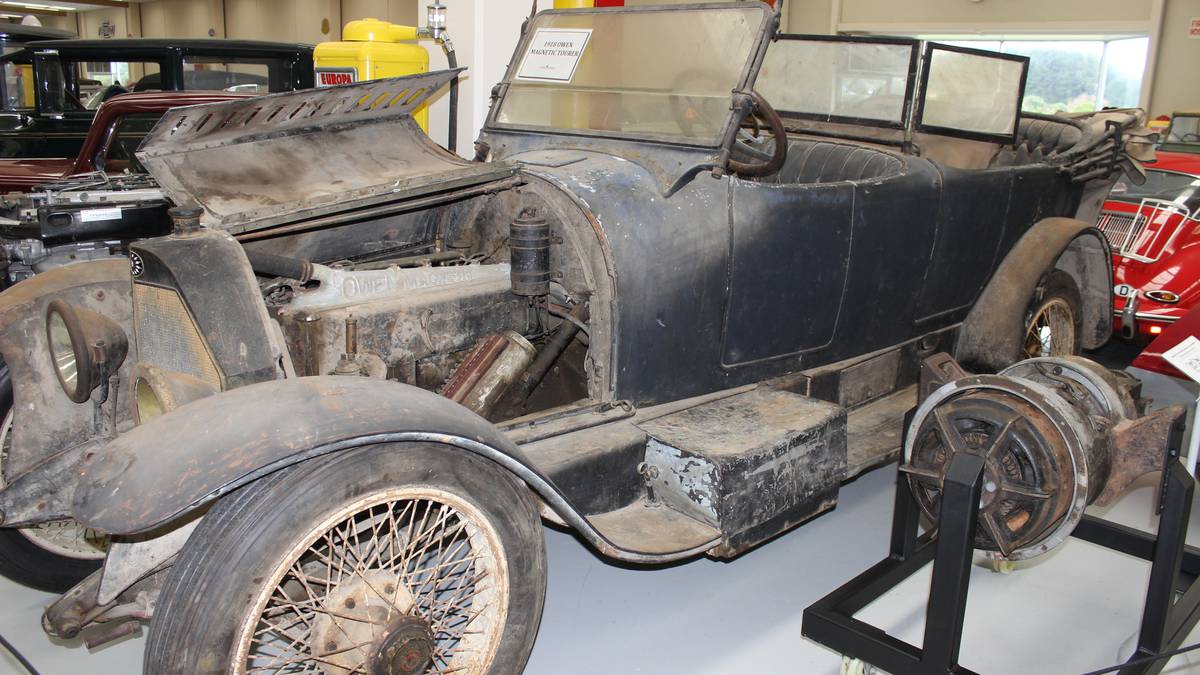 The Owen Magnetic automobile is atypical but also fascinating

One of the latest exhibits at the Southward Car Museum is one of the world’s first hybrid cars dating back over 100 years.

It’s also a car that was way before its time and still has people wondering how to drive it.

The museum’s deputy director, John Bellamore, said the Owen Magnetic, which the museum acquired in Hawke’s Bay, had been in storage for years, but was now on display to show people how an earlier hybrid car worked.

The car, built in 1918, had a six-cylinder gasoline engine that powered an extremely heavy electric motor generator.

“You better go to Jay Leno’s website where he explains how this one works.”

Seven Hundred Owen Magnetics, a hybrid electric luxury car, was produced by RM Owen and Co, New York, between 1915 and 1922.

Leno, speaking on his Jay Leno’s Garage web/TV show, lovingly restored an Owen Magnetic that was built in 1916.

“It’s probably the most unusual car I’ve had.

“I don’t think I’ve met anyone who’s ever heard of it or has any idea what it is.

“It’s called the thousand-speed car but it’s even a bigger mystery now than it was then.

“If you got into this car without prior knowledge, I don’t think you would know how to drive it or even start it.”

While there were electric cars in the late 1800s, the battery technology wasn’t good and you couldn’t drive far, he said.

Enter the Owen Magnetic where you could get “high mileage with the electricity powering the vehicle”.

Electric transmission was developed by Justus Entz who built the first car in 1897 and patented the technology in 1900.

“I’ve had a few electrical engineers look at this thing and they’re just blown away by it.”

An Owen Magnetic was “an electric car powered by a gasoline engine”.

“There is no mechanical connection between the engine and the rest of the transmission.

“The petrol engine is separate and what you have is almost like a flywheel.

“Think of a horseshoe magnet circulating around an armature creating electricity – that’s what powers this car.

“You know, when you put two opposing pole magnets together and they kind of fight, that’s what it feels like on the road.

“There’s no gear crunch, which was seen as a huge plus at the time because a lot of people couldn’t drive a shifter or the clutch was too heavy.

“With this car, all you have to do is move a lever [on the steering wheel] and go from one quadrant to another [for speed and braking].”

“The problem with this car is that it was so expensive.

“And a Model T only cost a few hundred dollars.”

Leno said he drives his Owen Magnetic “everywhere in the summer”.

“It does not heat up and it works well.”

An Owen Magnetic was “unique and complicated” but overall a “fascinating automobile“.

With a CAGR of 22.15%, the residential energy storage market size will reach USD 37.9 billion in 2028, according to Brandessence Market Research