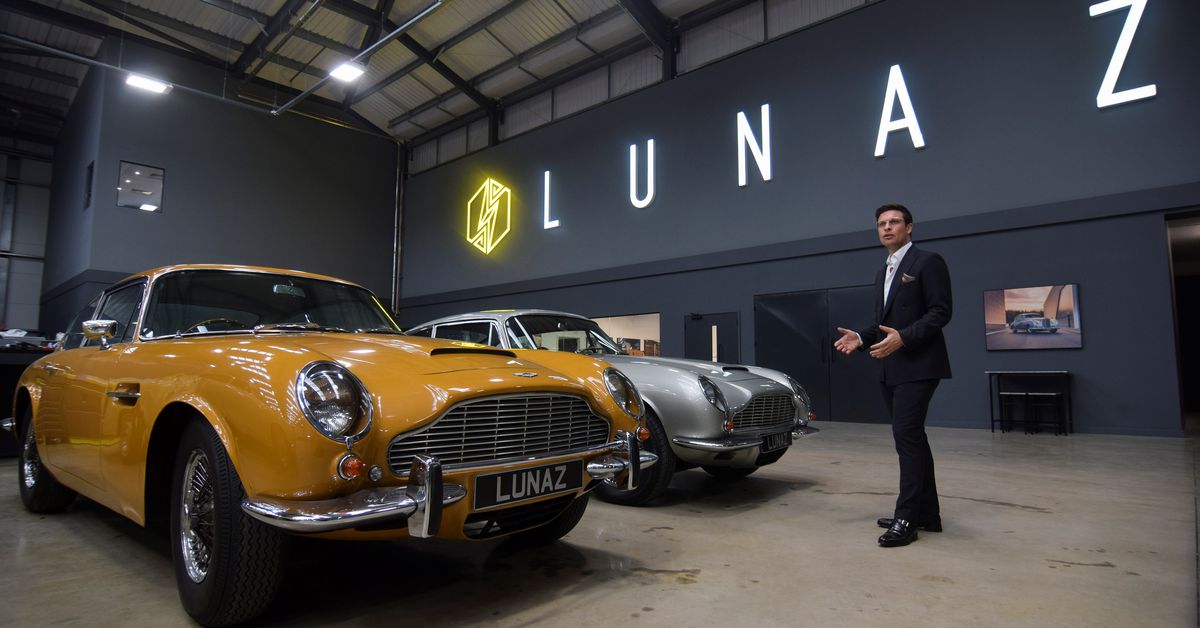 SILVERSTONE, England, December 2 (Reuters) – You can save your precious Aston Martin DB6, Porsche 911 or Mustang from the Museum of the History of Combustion Engines. Or your Fiat 500 and Renault Clio, for that matter.

That’s the message from a growing cohort of European and American startups looking to carve out a role for themselves in the automotive transition by converting roaring dinosaurs of the fossil fuel era into clean electric vehicles (EVs).

Register now for FREE and unlimited access to reuters.com

At the bottom of the scale, startups like the French Transition-One have developed no-frills kits designed to electrify mainstream models like the Fiat 500 and Renault Clio in a matter of hours for around 8,000 euros. They’re betting they can offer drivers a cheaper, greener road to zero emissions than scrapping their car and buying a new one.

Converting electric vehicles is a cottage industry that has emerged over the past five years and has been boosted by advancements in battery technology and electric motors over the past two. The market is largely untested, and several industry players interviewed by Reuters described an exciting, albeit precarious, scene.

“It’s pretty revolutionary right now,” said Mark Roberts, a 30-year McLaren veteran who is now creative director of British startup Charge Cars. “Almost every month new businesses are appearing and you don’t know who will go away after about a year or who will be there for the duration.”

Next year, Charge Cars will begin production of 499 electric versions of the 1960s Mustangs, built from the ground up using bodies produced under license from Ford (FN) and starting at 300,000 pounds each. The company, which initially set out to convert classic cars, instead spent five years developing an electric replica model.

“Traditional manufacturers like Porsche can afford to miss out,” said CEO Vadim Shageleev. “We’re a startup, so we can’t.”

Established startups like his have caught the attention of traditional car suppliers and manufacturers looking for technical input as they transition to electric – Michelin (MICP.PA), for example, has partnered with Charge Cars to test new technologies.

But there may be little room for error as a host of new electric vehicle conversion startups strive to evolve to help them overcome regulatory standards and rising costs that have started to be introduced. in countries like France.

“The new regulations will eliminate a lot of the small players because they won’t be able to meet the standards,” said Chris Hazell, founder of UK company Zero EV, another startup working on mass production conversion kits for them. Porsche 964 and other classics. models. His business will expand to the United States next year.

There are different routes offered at scale.

Lunaz, for example, sees classic cars like the Aston Martin DB6 as a good start.

The three-year-old company and its competitors at this end of the EV conversion industry aim to capitalize on the world’s large population of conventional vehicles, with around 5 million in the United States alone.

Lunaz typically buys a classic car on the open market or takes a customer’s existing vehicle, dismantles it to bare metal, rebuilds it, gives it a new paint, new interior and electric drive system and software. with a range of around 250 miles.

But Lunaz sees its future in commercial vehicles and is building a new factory at Silverstone, in central England, where the British Grand Prix takes place, to convert more than 1,000 diesel garbage trucks per year into models. improved electrics.

â€œClassic cars were the lightning rod to bring us to market,â€ said founder David Lorenz. “But if you want to have a real impact, you have to have a scale.”

Lorenz told Reuters the company is researching sites for a plant in the United States and one in mainland Europe, and plans to go public in a few years.

In France, by comparison, the race is intensifying among mainstream converters spying on an opportunity in the country’s anti-pollution plans, which overtake much of Europe.

All diesels older than 2011 will be banned in major cities from early 2025, affecting millions of car owners. Paris wants to go faster and apply the ban from 2024.

New vehicle modernization laws introduced in the country last year, which startups say require government testing of around 100,000 euros per generic model to convert, have intensified the need for scale.

The Orleans-based Transition-One converter plans to start selling conversion kits for six models, including the popular Fiat 500 and Renault Clio, to diesel owners who can’t afford a new EV. The kits consist of a battery, electric motor, power electronics and a new instrument cluster, and typically have a range of around 140 km.

The cost to customers could be around 5,000 euros, including government subsidies, said CEO Aymeric Libeau, who said he intended to produce kits “on a large scale” next year, after waiting. that the laws of modernization materialize, the equipment to be installed by an independent. mechanics certified by Transition-One.

Arnaud Pigounides, CEO of Paris-based REV Mobilities, estimates that converting a car to electric reduces emissions by 60% compared to scrapping an old vehicle and producing a new one, in a country that is home to around 40 million passenger cars.

Pigounides said his company, which offers to convert a range of cars and commercial vans for about half the price of a new vehicle, has orders to convert 370 cars and 1,500 vans.

â€œThe big question is, are we throwing all these cars away or are we converting them? ” he added.

Chris Pateman-Jones, CEO of UK vehicle charging company Connected Kerb, said only “mass market” options in the electric vehicle conversion industry could make a real difference to the environment, rather than classic cars.

â€œThe cost of producing a new car is huge, so if you can reuse what’s there, that’s a fantastic idea,â€ he said. “But the challenge is to do it on a scale sufficient to have a significant impact.”

For the four-year-old Electrogenic startup based on the road to Lunaz, the plan to reach significant size is to tap into rural Britain’s four-wheel drive market, particularly the popular Land Rover Defenders. among farmers.

Co-founder Steve Drummond said the company is developing a kit for older Land Rover Defenders for 20,000 pounds that local mechanics can install. He added that Britain’s 36,000 farms need four-wheel drive electric vehicles, but there are no new equivalent models on the market.

Across the world in California, Zero Labs recognizes the limitations of its current business in performing electrical â€œrestorationsâ€ to rebuild classic Ford Broncos and Land Rovers.

The company’s vehicles start at $ 350,000, but they can only convert about 50 per year. It is therefore developing electric platforms that authorized auto shops can use to convert classic cars.

Register now for FREE and unlimited access to reuters.com

Adjustment of the structure and maintenance of the automobile starter