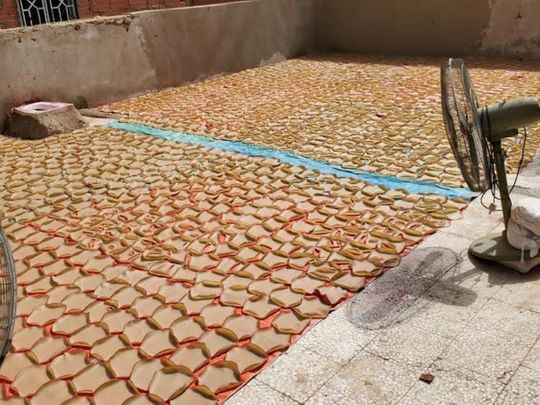 Abu Dhabi: Saudi authorities seized and destroyed 10 tons of kraambo, sun-dried bread known as manfush, mixed with motor oil on the roofs of a number of buildings in the Al district Nakasa in Mecca, local media reported.

â€œIllegal workers used a number of roofs of residential buildings in the Al Nakasa neighborhood to sun dry kraambo, or so-called manfush, after mixing it with motor oil,â€ then distributed the toxic product in the market in violation of health. requirements, â€said a spokesman for the Municipality of Mecca.

It was not immediately clear why these workers baked bread with motor oil, which, compared to other edible oils, is more expensive, poisonous and tastes bad.

The municipality said it also confiscated a number of gas pipes, stoves, bags of flour and various dyes. He confirmed that the offending workers were turned over to security authorities as part of the Homeland Without Violators campaign, to ensure food safety for citizens and residents.

The municipality acted on a denunciation by a number of citizens.

The Al Nakasa district is renowned for its poor living conditions. The low-income residents of the neighborhood have nevertheless adapted to living in such squalid conditions.