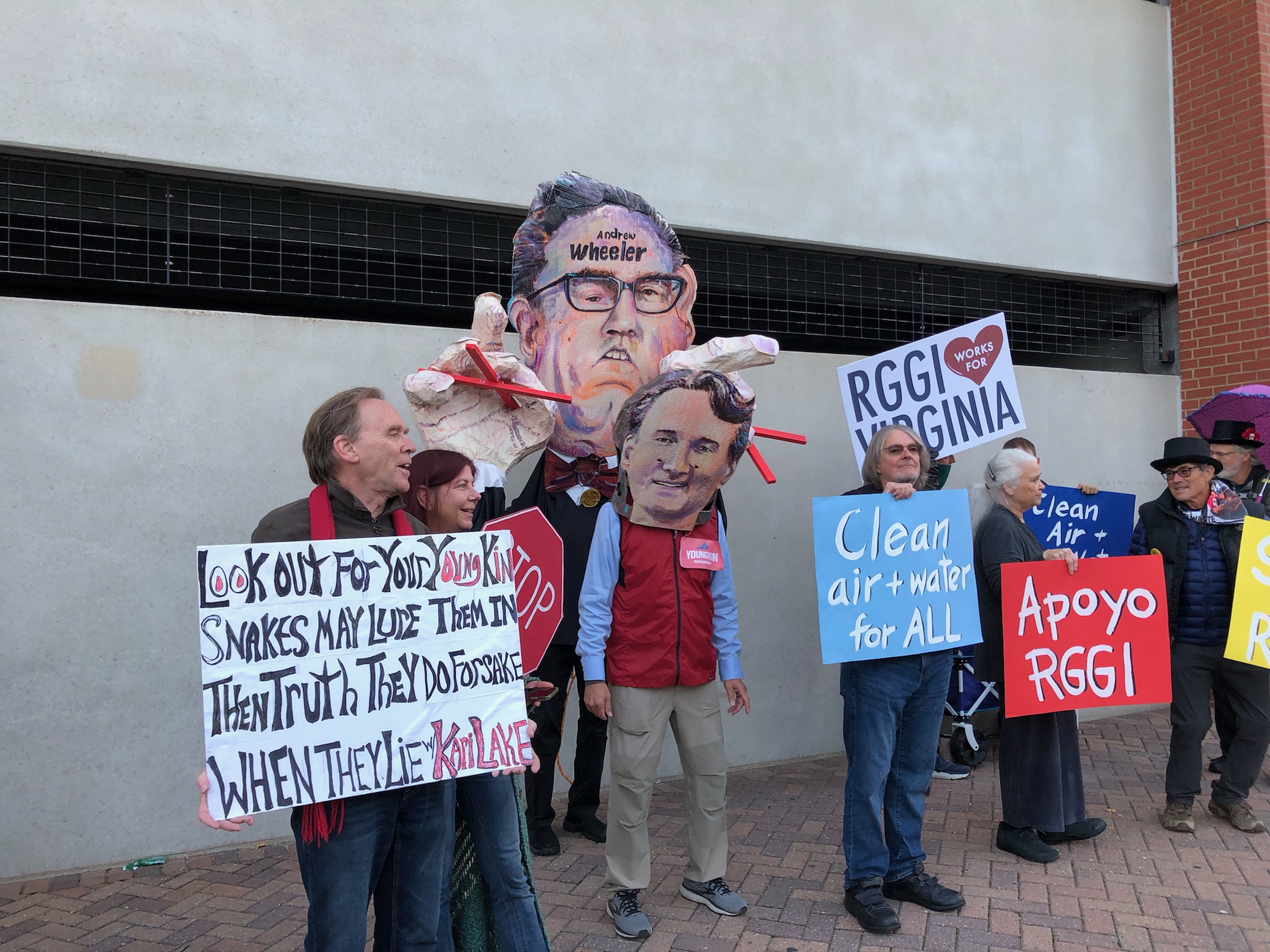 RICHMOND — Republican Gov. Glenn Youngkin caused a stir earlier this month when he released an energy plan that doesn’t mention climate change in its 35 pages, a U-turn from the carbon reduction pillars initiated by his Democratic predecessor.

This uproar continued at the recent Virginia Clean Energy Summit, where Youngkin provided an overview of an “all of the above” plan that focuses on its guiding principles of reliability, affordability, innovation, competition and environmental stewardship.

While listeners politely applauded his speech, many had already expressed disappointment at Youngkin’s proposals to reverse former Gov. Ralph Northam’s signing efforts to advance a once lagging Southern state as a leader. climatic.

One such critic is Kim Jemaine, who, in her role as policy director for the Virginia chapter of Advanced Energy Economy, represents a wide range of businesses statewide.

She characterizes Youngkin’s plan as a “turn around away from a cleaner, cheaper energy future.”

The plan’s proposals would weaken the landmark Virginia Clean Economy Act (VCEA), a 2020 law aimed at decarbonizing the state’s grid by 2050; repeal recently adopted electric car standards and withdraw the state from a regional climate pact.

“It misses the mark,” Jemaine said, adding that it overemphasizes hydrogen, small modular reactors and other nascent technologies instead of easily deployable renewables.

“This energy plan fails to find ways to achieve the five goals it has set out,” she said. “It looks like something developed in a vacuum without considering the policies already in place in Virginia.

“It’s a way to undermine them. And this is a missed opportunity.

Jemaine, 32, started working in the energy and environmental field in Virginia ten years ago. She received her master’s degree from Regent University in Virginia Beach.

After the Richmond summit, Energy News Network spoke with Jemaine about the EEA’s position on the details of Youngkin’s plan. This interview has been lightly edited for clarity and length.

Q: Youngkin proposes to reassess and reauthorize the VCEA in 2023 and then every five years thereafter. That first exam is fast approaching, isn’t it?

A: This is a really problematic piece… the legislation was passed in 2020, so why isn’t the first review happening in 2025?

These types of proposals only inject uncertainty into the market, especially for energy developers with lengthy review processes. Without a clear framework, it is difficult for developers and large energy consumers to have certainty or a plan for the future.

Q: Another recommendation from Youngkin is to allow state regulators to defer the renewable energy requirements set out in the VCEA to ensure reliability. Does that make sense?

A: One of the advantages of the VCEA is that it does not prescribe certain technologies, as it already allows emerging technologies. The targets are set for technology that is already available today, such as wind and solar.

Most important to me is to emphasize that the VCEA is both flexible and inclusive, despite claims that contradict this in the Governor’s energy plan. If a new technology emerges, carbon-free and ready, there is room for it in the standard mix of the renewable energy portfolio.

Q: Youngkin’s plan states that the Clean Car Law should be repealed to protect grid reliability. Can you answer that?

A: This law was passed to ensure that all Virginians have access to electric cars. This matches the trajectory of automakers and the direction the market is already taking.

Repealing a law that won’t go into effect for a few years means it would be harder for Virginia to access electric vehicles as manufacturers prioritize states with clean car standards. It’s a way for Virginia to be on the front line.

The administration keeps repeating the idea that Clean Cars will put a strain on the network. The governor knows that Virginia participates in the PJM, a regional transmission organization that serves a vast territory and is more than capable of meeting and exceeding the state’s electricity needs.

Not all electric vehicles need to be charged at the same time. Programs such as time-of-use tariffs will help with this. The electrification of transport is a transition that will take place over approximately two decades.

Q: Virginia’s potential to become a manufacturing hub for the offshore solar and wind industries is mentioned in four brief paragraphs on renewable energy in the “innovation” section of the plan. Have your member companies felt aggrieved?

A: The EEA has focused heavily on economic development and job creation in its comments on the plan. The governor missed an opportunity to focus on technologies that already have momentum and are gaining traction.

For example, offshore wind potential extends beyond Dominion Energy’s Coastal Virginia Offshore Wind project (2.6 gigawatts). We could see 30 gigawatts along the Atlantic coast over the next decade.

Companies are looking for areas on the East Coast that have the necessary components. Even though Virginia has the ports, skilled labor, ocean access, and is business-friendly, other states are vying for this business opportunity.

We need to secure Virginia’s position as a clean energy leader and provide investor confidence. The goals of the Virginia Clean Economy Act help us because they guarantee a market in the state.

Q: Governors of Virginia are limited to one four-year term at a time. Is an energy plan a one-time affair?

A: Virginia code requires an energy plan. Its release date corresponds to the first of October of the mandate of the new governor. Stakeholders submit comments beforehand.

We haven’t seen yearly updates on the plans, but there are periodic updates.

Q: Youngkin said the energy plan adopted by his predecessor, Governor Ralph Northam, went “too far in establishing rigid and inflexible rules” for the transition of energy production. Is this a fair assessment?

A: I don’t think so. Northam’s plan was a large and detailed 91-page document that included a robust outreach effort and met all legal requirements of the Virginia code. The same could not be said of Youngkin’s plan, as it lacked a number of elements, such as how to approach the transport sector.

The governor is responsible for developing a strategy to achieve a goal of net zero carbon emissions from the main emitting sectors.

Of course, each governor has the ability to take a different approach.

Q: You mentioned the difference the legislation can make by tying the Biden administration’s Cut Inflation Act and the Infrastructure Investment and Jobs Act to federal money. Can you elaborate?

A: We are going to see massive investments in energy storage, efficiency, grid infrastructure and transmission.

When we receive federal money, we know where to invest it because the VCEA sets specific goals and targets for wind, solar, storage, efficiency and other technologies.

States that don’t have goals and targets in place must create them and then devise a plan on the fly to decide where to allocate those dollars. If we in Virginia back down, we become misaligned with the transition that is happening everywhere else.

Q: To spur jobs and economic development, Youngkin is targeting Southwest Virginia as the launch site for a commercial small modular nuclear reactor within the next decade. What is the AEE’s response?

A: We fall in the middle. The EEA supports investment in emerging technologies that can contribute to a clean grid. But the Youngkin administration should invest in proven technologies ready for immediate deployment in Virginia.

Small modular reactors are in the research and development phase. Only two are operational worldwide. At some point in the future when they are proven to be cost effective and safe, we are optimistic about their potential.

We are therefore not opposed to the inclusion of small modular reactors. But we are opposed to blocking progress in wind, solar and energy storage for what is essentially focused on nuclear, hydrogen and other emerging technologies.

Q: Youngkin’s plan refers to the Regional Greenhouse Gas Initiative as “simply a tax on taxpayers” and “a bad deal for Virginia.” How can it be when organizations have directed millions of RGGI dollars to fund flood prevention initiatives and energy efficiency projects for low-income Virginians?

A: The governor began to develop a plan to suppress the RGGI as soon as he was elected. Through it all, what we haven’t seen from this administration is a solid explanation for the government’s aversion to the RGGI or an alternative to fund these types of programs.

Youngkin focuses on reducing energy bills. One of the tangible benefits of the RGGI is saving people money on their energy bills, as energy efficiency improvements allow them to use less energy in their homes.

We will see the impacts of flooding as temperatures rise. Rather than responding to emergencies, RGGI offers an opportunity to invest in resilience preemptively before it becomes an urgent need.

Q: What is missing from this conversation that Energy News Network readers should know?

A: Virginia’s Clean Economy Act, Clean Cars, and Virginia’s decision to join the Regional Greenhouse Gas Initiative were all passed by elected officials and have yet to be repealed.

Ideally, Youngkin’s plan would have found ways to take advantage of these laws and policies.

Questions or comments about this article? Contact us at [email protected]