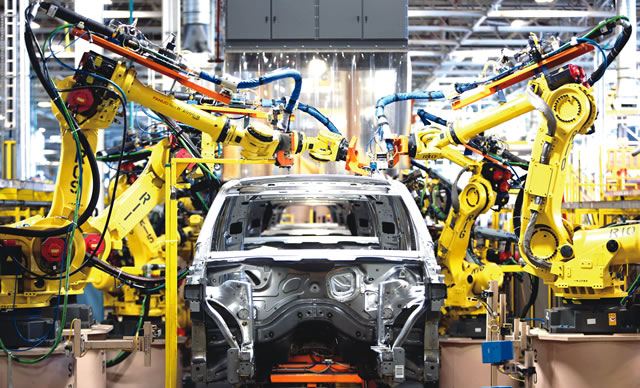 Nigeria and its automotive industry

Is Nigeria mature enough to have its own auto industry? The answer is no. For the country to manufacture automobiles, it must be able to produce at least 85% of the components locally. A wide variety of materials are used to make automobiles. These include iron (which is transformed into steel), aluminum, glass, polymers (fiber-reinforced plastics and composites, rubber and textile fibers). Traditionally, metal alloys have been used, but for the past 50 years plastics have attracted great interest in the automotive industry due to their light weight, long life and low fuel consumption. Metal alloys are heavy and are susceptible to dents, dents, and corrosion.

In the manufacture of automobiles, the polymer is an important component. The polymer contains plastics, rubbers, fiber reinforced composites, foams and textiles. To give some examples of polymer use, polymer rubber is the material used for car tires; the seat belts and the seats are made of textile. Polymeric materials for automotive applications can be either thermosets or thermoplastics. Raw materials for thermosetting resins include natural rubber (for tires and a mixture containing thermoplastic for bumpers). Engineered polymers used for various automotive applications include polyurethane for bumpers and gasoline cans; polyvinyl chloride for pipes, doors, sheathing of electrical cables and dashboards. Acrylonitrile butadiene styrene for body parts, dashboards and hubcaps. Polyamide 6 and 66 (Nylon 6 and 66) for gears, bushings, cams, bearings and weather resistant coatings. Polystyrene for automotive fittings and equipment boxes. Polyoxymethylene for interior and exterior trim, fuel system and small gears. Polycarbonate for bumpers and headlight glasses. Polymethyl methacrylate for windows and mosquito nets. Polybutylene terephthalate for door handles, bumpers and carburetor components, polyethylene terephthalate for gear housing, headlight retainer, engine cover and connector housing. Acrylonitrile styrene acrylate, similar to acrylonitrile butadiene styrene but with greater toughness and rigidity – for housings, profiles and interior parts. All of the above products are technical polymers. The basic polymers that are used are polyolefins – polypropylene and impact resistant polyethylene. Technical polymers are not produced in Nigeria, but the Nigerian National Petroleum Corporation produces polyolefins which are not used in large quantities. While Nigeria produces less than 5% of automotive components, the country is not a manufacturer but an assembler.

In terms of safety, from windshields to bumpers, various plastic components are safe with different safety roles to play. Polyester seat belts and nylon airbags have saved countless lives around the world. Filling the roof supports with plastic foam helps strengthen the roof structure in the event of an overturn. Foam plastic inside the door panels and the front and rear bumpers absorbs the impact of a collision. This is in conjunction with blends containing elastomeric material mixed with thermoplastic polymers. Reducing a vehicle’s weight above its center of gravity has been shown to increase resistance to vehicle rollover. This can only be accomplished by using plastics. The headlight lenses have been updated with shatterproof clear polycarbonate. Plastic fuel tanks are now very common in most vehicles due to their light weight, lack of welded seams, and are less likely to split in a crash. The production process of this gasoline tank is known as co-extrusion. Another major advantage of using polymeric materials is fuel economy. Currently, the components of plastics in a car are around 14% but when you include other polymeric materials (tires, textiles, elastomers, etc.) it is over 30%. By 2020, the average car is expected to incorporate around 75% polymer materials.

Research activities in the automotive industry are now in the area of â€‹â€‹fuel economy. In the United States, Corporate Average Fuel Economy standards set by the National Highway Traffic Safety Administration require automakers to achieve fuel efficiency in excess of 50 miles / gallon by 2025. Automakers are still turning to plastics as way to achieve this. Thus, the lighter the weight of a vehicle, the lower the fuel consumption. A good example is the aerospace industry where the industry uses fiber reinforced composites for most of its components. America’s General Motors is concerned about the CAFÃ‰ ratings of its passenger cars. GM noted that if the sales mix for its vehicles had been the same as that of its main Japanese competitors, its COFFEE rating would have been: GM mix with Honda, 31.6 mpg versus 30 mpg from Honda. GM with Nissan mixes 29.4 versus 28.4 mpg for Nissan; GM with a Toyota mix, 30.3 versus 30.6 mpg for Toyota. GM’s actual rating was 27.1 mpg.

With the above, is Nigeria a car manufacturer country? I guess we just assemble various automobiles with components made in foreign countries. Nigeria could have been one of the major car manufacturing countries if the Volkswagen and Peugeot assembly plants were still alive. A good example is the Proton car from Malaysia. The idea of â€‹â€‹having auto factories in the country was put forward by then Prime Minister Dr Mahatiar Mohammed in 1983. The Malaysian government partnered with Mitsubishi Motor Corporation in Japan. Mitsubishi supplied the engine. All other components, including steel, aluminum and polymeric materials, were all made locally. The first Proton Saga powered by Mitsubishi Orion 4G13 was launched on July 29, 1985. Today, due to innovation and technological advancements, Mitsubishi no longer supplies the engine as it is now manufactured locally. Different Proton models that can compete with the best in the world are now available. The first automatic car I drove was Proton Saga when I was Professor Madya at Universiti Sains Malaysia, Penang in 1996.

With the establishment of the automobile industry in Malaysia, the economy improved and the cost of purchasing a car was drastically reduced to below 50 percent. The proton is present in around 12 countries in Southeast Asia. According to the Center for Automobile Research in Ann Arbor, Mich., Auto manufacturing is vital to a strong economy because prosperity is closely linked to mobility. Among the group of 20 countries – USA, China, Japan, Germany, India, UK, France, Italy, Canada, Australia, Brazil, Russia, Mexico, Turkey, Saudi Arabia, South Africa, Indonesia, Korea South, Argentina and Europe Community, only one country – Saudi Arabia – does not have an automobile manufacturing plant.

Everything in Nigeria is now made in China. According to the recent publication in Guardian Newspaper (December 23, 2016), one of China’s leading automakers, GAC Motor has released its best-selling sport utility vehicle in the Nigerian market, the GS4. The unveiling, which took place in Lagos, drew dignitaries including the Lagos Oba, Rilwan Akiolu, and state government officials. How long are we going to continue like this? Nigeria is full of talent who can make a difference. If politicians are not interested in the development of the automotive industry in this country, what about the private sectors?

With this, the business can grow and Nigerians can buy Nigeria made vehicles at a reduced cost. Tokunbo cars are already dead in the countries where they were made but buried in Nigeria. Kudos to Innoson for leading the way. In most civilized countries, the auto industry represents over 15 percent of the workforce. Recently, in Automotive World magazine (June 17, 2014), Constantine Biller explained the role of the auto industry in returning growth to the global economy, citing Volkswagen’s recent announcement outlining its investment plan of 7 billion dollars in the North American auto industry. over the next five years, embodying the strength of the global automation market.

If Volkswagen’s assembly plant in Nigeria is still in operation, probably today, it might have morphed into a manufacturing facility where more than 80% of the components will be available locally. Nigeria is mature enough to have its own WAZOBIA cars. If some developing countries can do it, why not Nigeria? West Europeans have more cars / 1000 people than anywhere in the world. Italy tops the list with 591; Germany, 500, Japan, 475; United States, 463; China, 58 and India 18. Nigeria can be less than 10 per 1000.

All rights reserved. This material and any other digital content on this website may not be reproduced, published, broadcast, rewritten or redistributed in whole or in part without the express prior written permission of PUNCH.