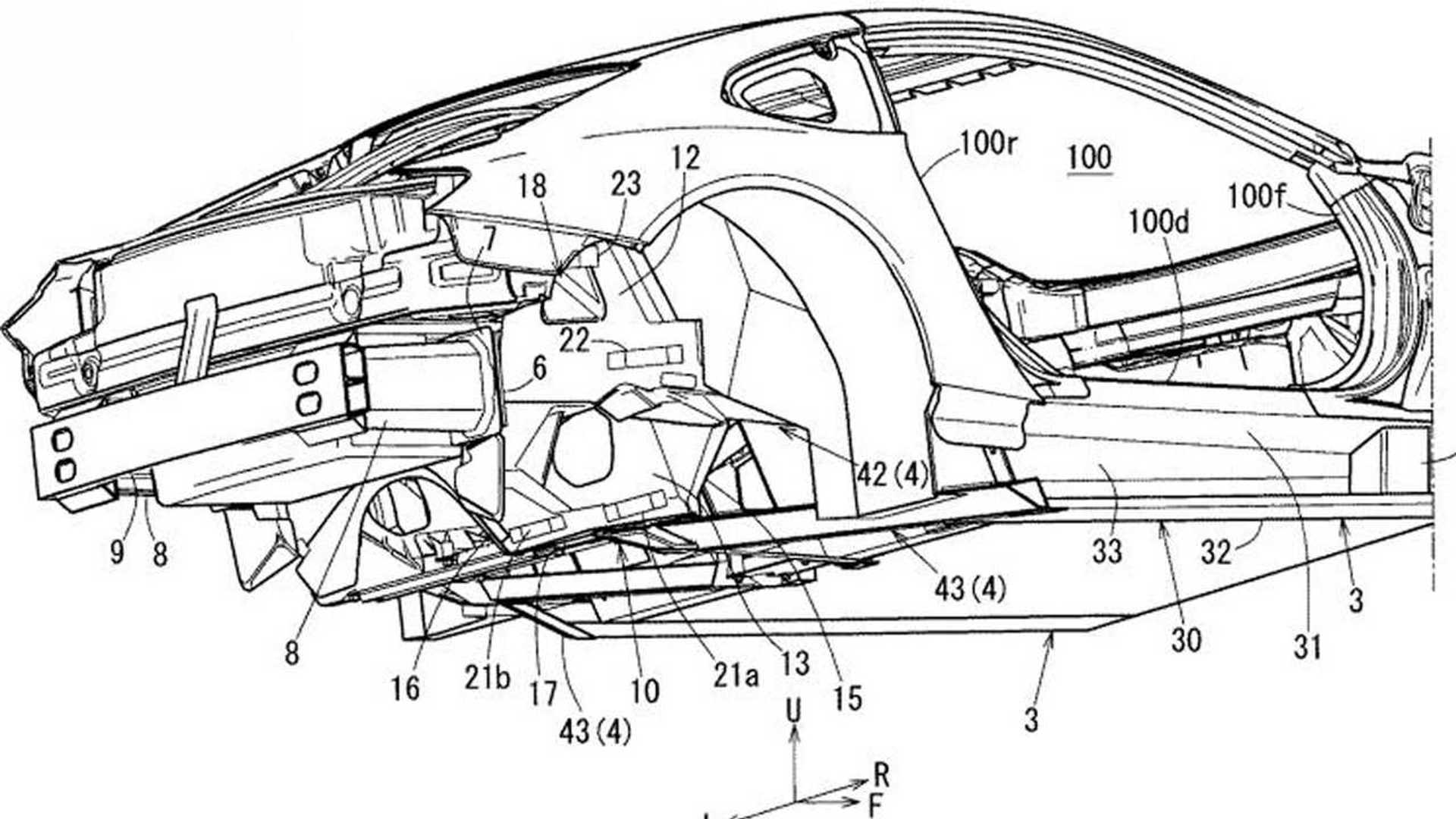 Before diving into this tantalizing discovery, it’s important to remember that the world of automotive patents is filled with unrealized ideas. Far more often than not, ideas are patented simply to protect them in case they are needed for future projects. We say this because rotary fans are feverish in their passion for Mazda sports cars, but proceed with cautious optimism. This new patent filing is far confirmation of anything.

That said, it is clear that the series of patent filings published this week deserves to raise eyebrows. They are highly technical in nature and relate to structural designs for the rear suspension and body structure of a vehicle. The visual drafts feature close-up drawings of various beams and frame structures, with explanations of the designs handling front-to-rear loads as well as side loads.

Generally speaking, this is all pretty mundane to the average person, with the exception of two pictures. The one featured at the top of this article is obviously the Keeper, as it clearly shows the rear of a sports coupe. Moreover, the patent filing even says the same – buried in the technical speech of patent number 2021-112926 (P2021-112926A) entitled Vehicle rear body structure is the next passage, translated into English.

The vehicle of this embodiment adopts a so-called space frame structure in which a plurality of extruded aluminum alloy frames are connected to form a vehicle body skeleton, and also adopts a center post-less structure with two side doors. it’s a sports car

It doesn’t get much clearer than that, but that doesn’t mean that this proposed sports car uses an internal combustion, rotary or other engine. However, we draw attention to another patent image regarding structure and strength. There is clearly a central tunnel running longitudinally down the middle of the car where you would expect to find a driveshaft, and the tunnel widens out at the front where a gear transmission would be.

At this point, it’s worth mentioning that this isn’t the first time we’ve seen Mazda filing for patents for a future sports car. Almost two years ago, we reported on the front designs of a possible Mazda sports car, and in fact these new patent filings are dated January 16, 2020, although they are from to be published this week. It doesn’t take a genius to put the pieces of the puzzle together, but of course a lot has changed in the world since the start of 2020.

Here’s the million dollar question we know you’re asking. Are we looking at the early stages of a Mazda RX-9? With all of those patents together, we end up with a front-engine sports car with aluminum construction, spinning the rear wheels with a reinforced frame and a suspension setup designed to withstand higher stresses. And there’s no denying the similarity between the rear sketch of those patents and the 2015 RX-Vision Concept.

In our mind, this indicates some kind of electrification. The heavy battery weight and immediate torque of an electric motor requires increased chassis strength, and we know the future is electric. However, the design clearly calls for some sort of combustion engine, but we’ve heard repeatedly that a rotary engine – if used in a production vehicle – would only be a small unit for charging batteries. . We say if because the initial plans to launch Rotary as a range extender in the MX-30 are on indefinite hold. And as we said at the start, this flurry of patent activity could also be just Mazda securing an idea, nothing more.

Still, it’s intriguing that Mazda is at least active on some sort of sports car, even if that’s just an idea. The next few years should be quite interesting.