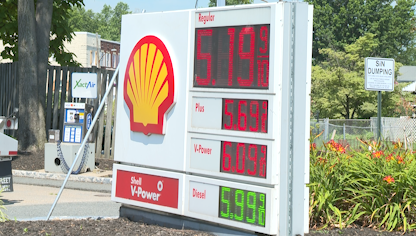 The gasoline tax in Virginia and Maryland went into effect Friday at 12:01 a.m. In Virginia, the tax on a gallon increased by three cents to 28 cents. In Maryland, the tax is 42 cents per gallon after an increase of seven cents per gallon.

Millions of drivers hit the road this fourth

Several gas stations in Alexandria sold fuel for more than $5 a gallon, even though AAA found the average price in Virginia was $4.65. The Maryland averages $4.77 per gallon. Both are below the national average of $4.82

“It seems like a bad time to have a car. But unfortunately it was necessary,” said one woman, who only identified herself as Marin.

Others think it’s not the right time to raise the fuel tax.

But, the US Department of Energy (DOE) has some things that might help you save money.

First, reduce idling where you’re parked and when you’re home. The DOE estimates that this costs you two to four cents per minute. If you run the air conditioner, the cost goes up to three to five cents per minute. Additionally, reducing idling can save you between a quarter and a half gallon of fuel per hour, depending on engine size and air conditioner usage.

You can save up to five cents a gallon by removing unnecessary items from your car, especially heavy ones. The DOE estimates that an extra 100 pounds in your vehicle could reduce your mileage rate by about 1%. The extra weight affects smaller cars more than larger ones.

Cruise control probably won’t help you when driving around town with all the starts and stops you go through. But, when you’re on the highway, the DOE says it’s a good idea to use cruise control to help you maintain a steady speed and, in most cases, save gas.

“Actually, I like to walk a lot and I have a bike. If you have a bike, I suggest you use it. But I know not everyone can do that,” Roach offered as suggestions for saving money if you can.