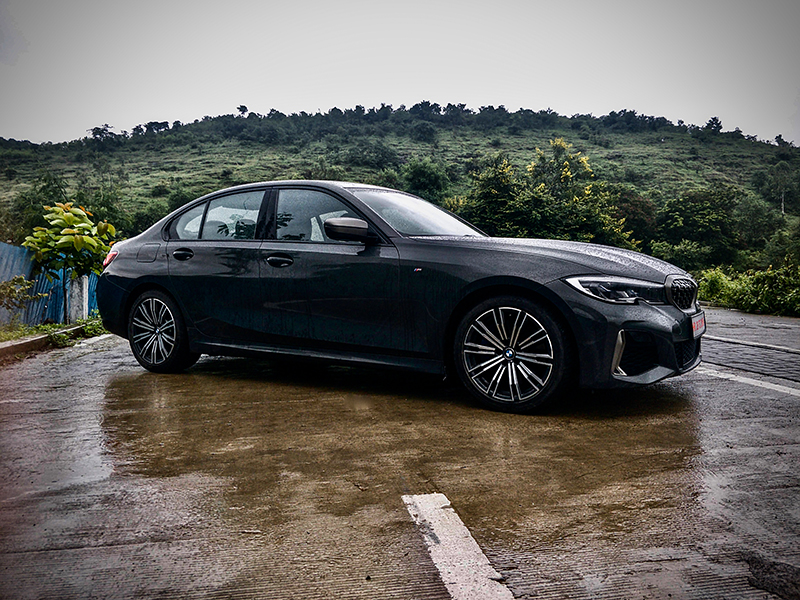 
The BMW M340i is visually as distinct as a regular 3 Series.The juggling job is daunting. Not only is it necessary to throw and catch multiple objects in the air, creating a large wheel of flying paraphernalia, but there are also the precise movements of the legs to coordinate, and the eye on the audience to assess. interest and reaction. All this, while wearing makeup and a costume that are not always the most flattering. After a weekend with the BMW M340i this was all I could think of.

Let’s start with a simple question: who is the BMW M340i for? It’s for you, your wallet, your family, and the child in you. BMW has realized that there are people out there who crave the manic, all-out, roaring, over-the-top M3 frenzy, but don’t have the lifestyle or the money to do it. To tone down the feeling of “The 320d is good, but it doesn’t get me going”, BMW came up with an idea.

The heart of this wave of ideas was to insert a six-cylinder engine into the 3-Series. The M3 and M4 have one, but the regular 3-Series does not, and we sorely missed that. So the turbocharged 3.0-liter inline-six engine produces 387 hp and 500 Nm, numbers that are sure to put a smile on everyone’s lips. Mine was stuck with the same intensity as a tongue stuck to a frozen post. 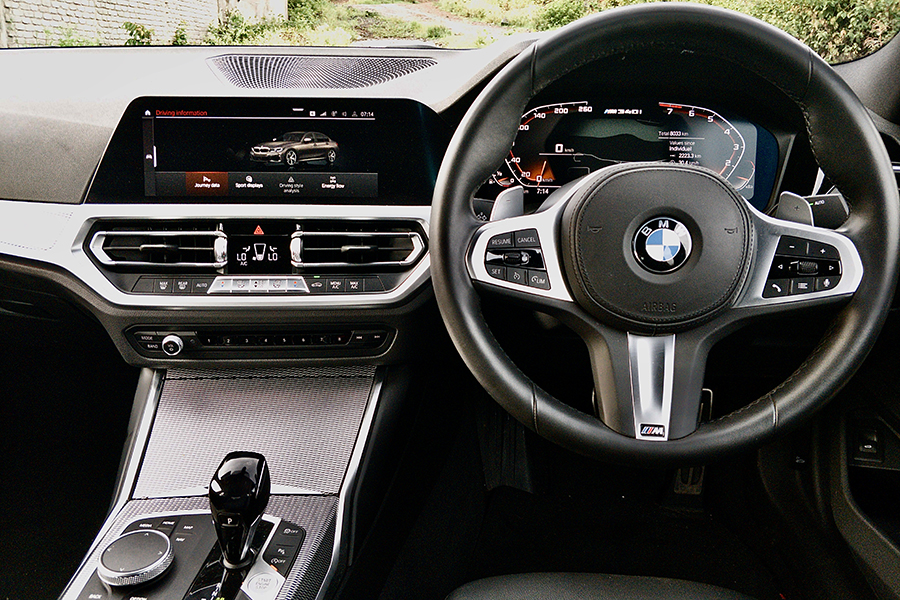 The cabin of the M340i is minimalist and resolutely modern. Locate the M340i badge
Bmw claims a 0-100 km / h in 4.4 seconds. But unlike the M3, you don’t desperately walk away from it with a visit to the chiropractor. It’s comfortable, the M340i. It could fit four people there and no one would complain that the seats were too stiff or that the legroom was insufficient. And you can easily put a few suitcases in the back, in case you are planning on spending a long weekend.
And if you do, you’ll notice it’s armed with luxuries that are slowly becoming necessities. Cruise control, for example, is a kit that I realize is a must have in modern and luxury cars. With highways only going to get better, having a car that can accelerate and decelerate on its own to maintain a certain speed you set is a blessing. And you suck in the parking lot? BMW’s Parking Assistant will spot the space parallel or perpendicular to the road and move the car to where you want it to be. 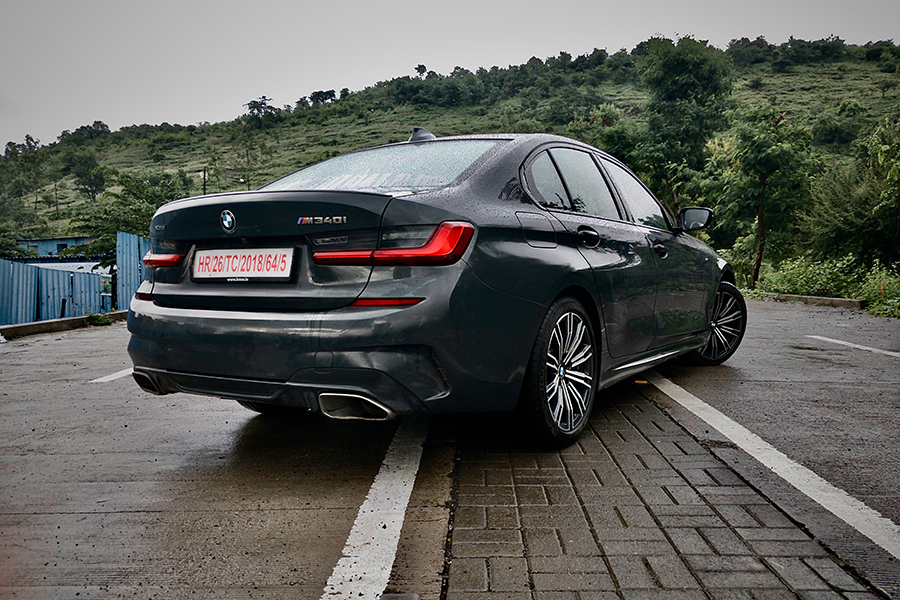 A real “sleeper”. Subtle tweaks are the only way to differentiate yourself from the regular 3 Series

A 10.25-inch touchscreen in the middle of the dash houses most of what you’d need to switch in the car: media, navigation, drive modes, and rear-facing camera screens. You can also blurt out â€œHey, BMW, I’m coldâ€ and the heat will automatically increase. My favorite track? The head-up display, which projects a minimalist version of the instrument cluster onto the windshield so you don’t have to take your eyes off the road.

Maybe the only thing I’m not fully convinced about is BMW’s gesture control. It is intended to help drivers focus on the road by allowing them to perform tasks such as adjusting the sound volume or fast forwarding tracks with hand gestures. It works, but not as smoothly as expected.

Now let’s see what the M340i looks like behind the wheel. The first thing I tried was a full bore acceleration test to get a feel for the engine. It’s not about how fast it gains in a short period of time, but rather about the interplay between management, your right foot, and your mind struggling to keep pace. Heavy steering tells you exactly what the front wheels are doing, the brakes add a touch of skillful control to any accidental kicking forward behavior, and the ZF 8-speed automatic gives you exactly what you need, exactly when you need it. need it. 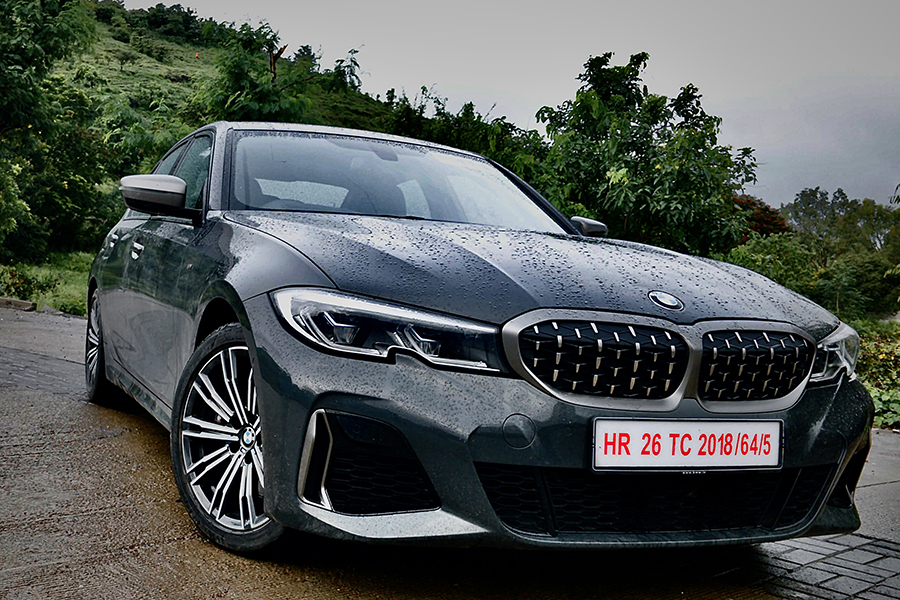 Driving fast can be rewarding, but the M340i is just as quiet and just groceries. Potholes on the way? The 18-inch wheels are more than up to the task to give you a cushioned response to craters on the road.

The M340i handles the tasks of being comfortable, practical, luxurious and brutally fast. It will keep you, your wallet, your family and the child in you at peace. Its ability to juggle so many aspects is the result of BMW perfecting its art over the years, pointing out flaws and focusing on the need of the hour. The happy medium that has the 3 Series on one side and the ridiculous M3 on the other? The M340i nails it.

Click here to see Forbes India’s full coverage of the Covid-19 situation and its impact on life, business and economy

E10 fuel changes: drivers “will not be covered” by auto insurance policies after gasoline damage

Is Europe’s energy crisis calling into question its strategic autonomy?