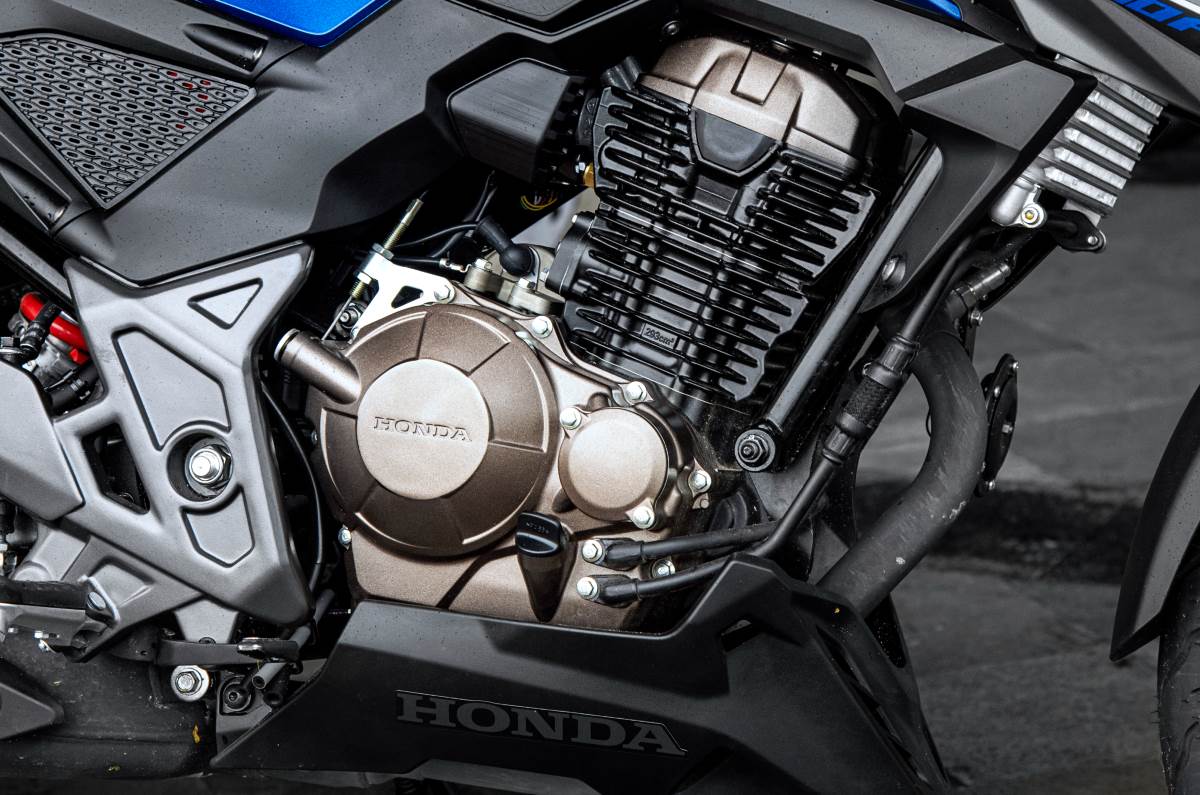 Here’s what Honda’s fourth offering in the 300-400cc segment brings to the table.

The lower middleweight market (250-500cc) is one of the fastest growing in India at the moment, but for all its might, Honda hasn’t really been able to carve out a piece of that juicy pie. The H’ness CB350 was touted as the bike to challenge RE’s stranglehold on this segment, but it was never quite able to fully deliver on that promise, being limited to Honda’s premium BigWing showrooms only. And as great as the CB300R is, its price is just too close to more capable competition to succeed. To launch a new attack on the segment, the Japanese giant has released a new motorcycle that seems to attempt to rectify the main flaw of the CB300R. Called the CB300F, it’s also a naked streetfighter like its sibling, but takes a simpler approach to things, and as a result, also comes in at a good Rs 62,000 below the CB300R.

In isolation though, the price of Rs 2.26 lakh (Rs 2.29 lakh if ​​you want the Pro variant with Bluetooth connectivity) for the CB300F still seems quite steep when you look at the other numbers for this bike. At 293cc, the F’s engine is slightly larger than the R’s, but it features a simpler construction – SOHC architecture compared to the R’s DOHC and air and oil cooling as opposed to liquid cooling. This explains its lack of power and torque. Unfortunately, the CB300F is not only down in performance compared to its sister, but also compared to its external competitors. With 24.5hp on tap, the CB is beaten by even smaller 250cc machines like the Suzuki Gixxer 250 (26.5hp) and KTM 250 Duke (29.91hp). The horsepower of this CB is exactly the same as the Bajaj Pulsar 250. And when placed against a direct rival – a 300cc streetfighter like the BMW G 310 R – the deficit is 10 bhp!

Worth noting, however, is the fact that the Honda produces its peak power and torque much lower in the rev range than most rivals. And you feel it when you step on board. The CB’s 25.6Nm of torque is more respectable in the company it keeps, and the engine’s low-end and mid-range pull is pleasing. That should make the engine well enough suited to hauling you through city traffic, and the light clutch helps here too. But overall engine performance is still below what you’d want and expect at this price point and displacement point, and it certainly doesn’t hold up in the last third of the tach where this CB starts to lose speed .

Of course, there’s more to motorcycles than power and acceleration. But given all the literature Honda itself has created around the CB300F, showering it with tags like “tremendous”, “furious” and “fast”, the engine performance doesn’t quite live up to the mark. hype.

After looking at the spec sheet, the hope was that the modest output numbers would pave the way for other goodies like handling and refinement, a traditional Honda feature. But those expectations didn’t quite materialize once we left. The engine is quite drivable, but when it comes to refinement, this engine does a disservice to the badge on the tank. There is a hint of buzz at most touchpoints, at all points in the rev range. But once past around 5500 rpm, the vibrations really kick in, and maintaining those revs feels almost unpleasant for the engine.

This is a problem when it comes to motorway driving, because even in 6th gear (which is a fairly high gear) you can only go 90 km/h without the vibrations showing up. At 100 km/h you can definitely feel the buzz all the way through the bike, and at 110 km/h things seem very lively and busy. It doesn’t help that at this point the engine also starts to run out of steam, and I don’t think you’ll be able to go much higher than the 130 km/h mark on flat ground. This engine feels at its best when driven at city speeds, but it’s not the ideal use case for what’s billed as a sporty 300cc streetfighter.

One of the few areas where this bike has somewhat lived up to its labels is handling. The hardware is good—a Showa USD fork, preload-adjustable monoshock, and fat radial tires at both ends. Once the polish was cleaned from the rubber, the CB300F proved to be a fairly natural handler, with reasonably quick steering and good grip from the MRF Revz tires even in the wet. It’s only at high lean angles that the bike starts to feel a bit jittery as it nears the limit. For everyday use, the CB comes across as quite light and maneuverable, with an empty weight of 153kg and a very accessible seat height of 789mm, making it ideal for getting around town. 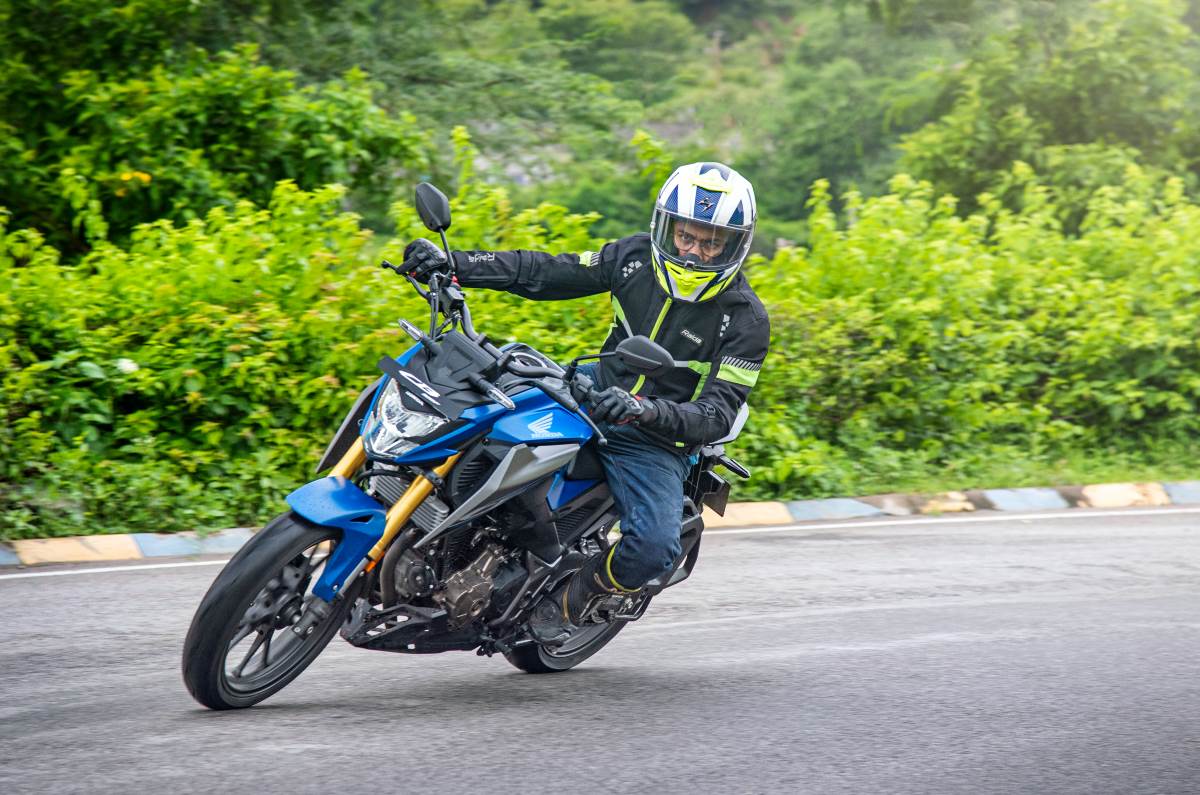 But that same suspension that helped with neat handling doesn’t do as well in terms of ride quality. It’s obviously a pretty soft setup – it crashes pretty easily when you push the bike down from a standstill, and most of the travel is wasted slouching with two heavy occupants on board. But despite that, it doesn’t absorb bumps very well, and it’s definitely not what you’d call plush. It’s not harsh or shocking either, but anything more than small bumps are definitely transferred to you, although the suspension does round them out to some extent.

Where this bike does better when it comes to comfort is when it comes to the seats. We only had a short time in the saddle so a more precise idea of ​​long-distance comfort will come later, but first impressions are good. You sit fairly well and upright – there’s not much drop to the high-placed handlebars, and your upper body is fairly upright, but the footpegs are set back a bit, which adds an element of sportiness to the set position. The seat itself is quite roomy, and most importantly, this bike feels noticeably taller and more accommodating than the CB300R, which comes across as a considerably taut and compact bike. 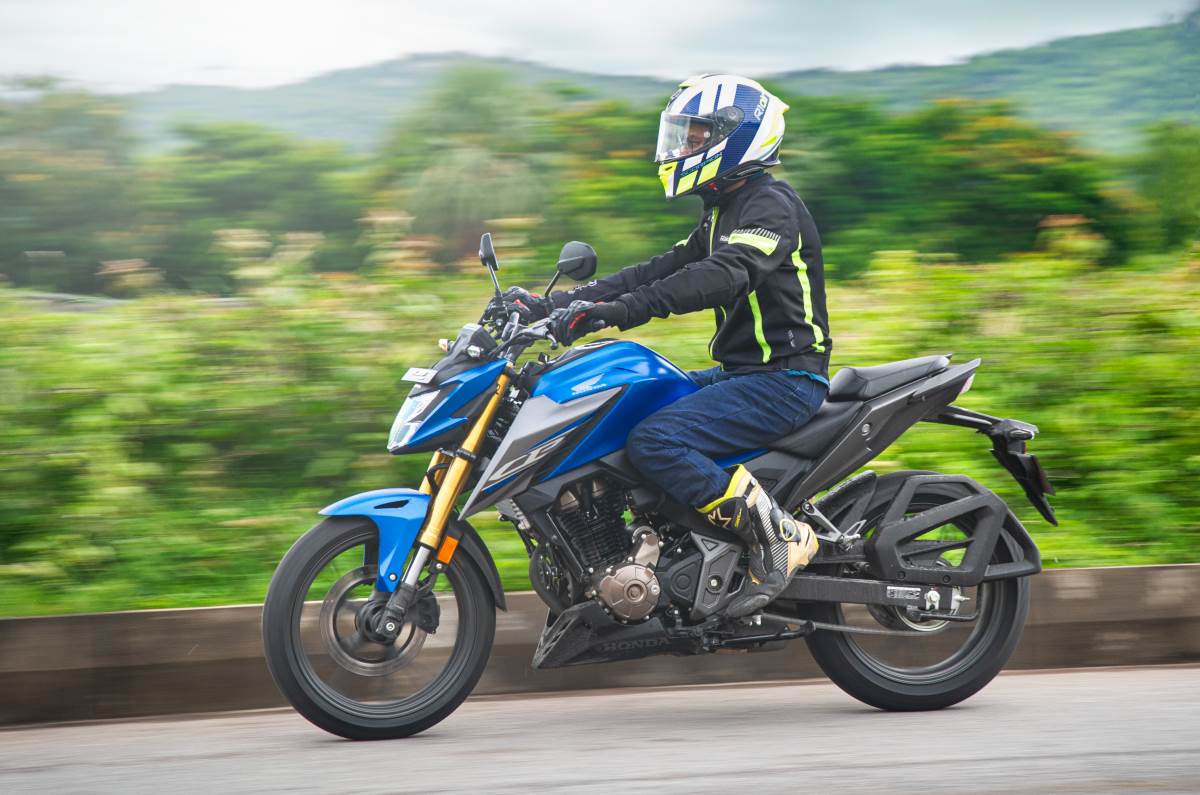 Unfortunately, the brakes don’t deliver on the promise of sportiness either – there’s adequate, but not great, stopping power on offer. The biggest issue, however, is that the feel at the lever is quite spongy and robs you of confidence. 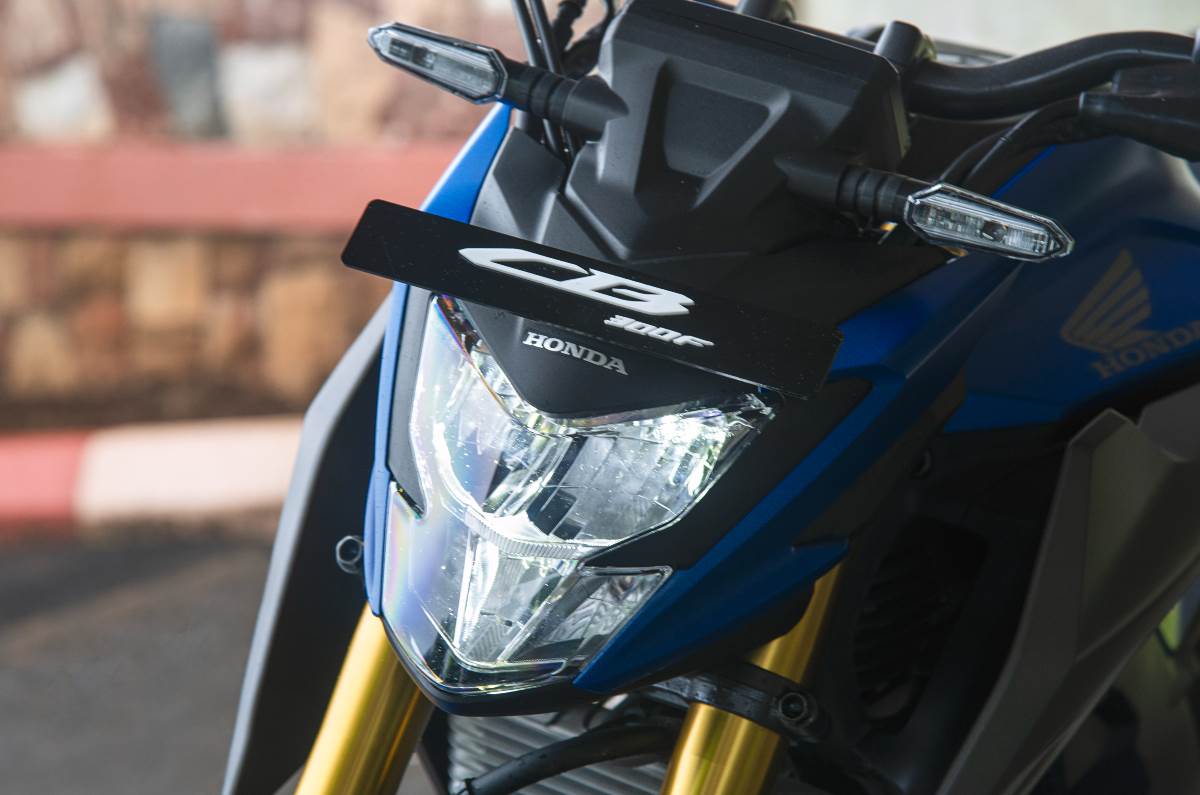 The one area where the CB300F’s sportiness can’t be denied is its looks, as it’s quite a handsome and aggressive design. Elements such as the low-slung headlight, gold inverted fork and pointed, intricate, “floating” fuel tank extensions not only give it a premium air, but also an intentional stance. The rear of the bike isn’t as dramatic; the pitch between the seats is smooth and the rear section isn’t steeply angled, but the stubby exhaust box and dormant tail give the bike a nice, clean look. Ultimately, as attractive as this design is, there’s no getting around the fact that it looks a bit like a Hornet 2.0 with bigger tires, except for a few things like the taillight. 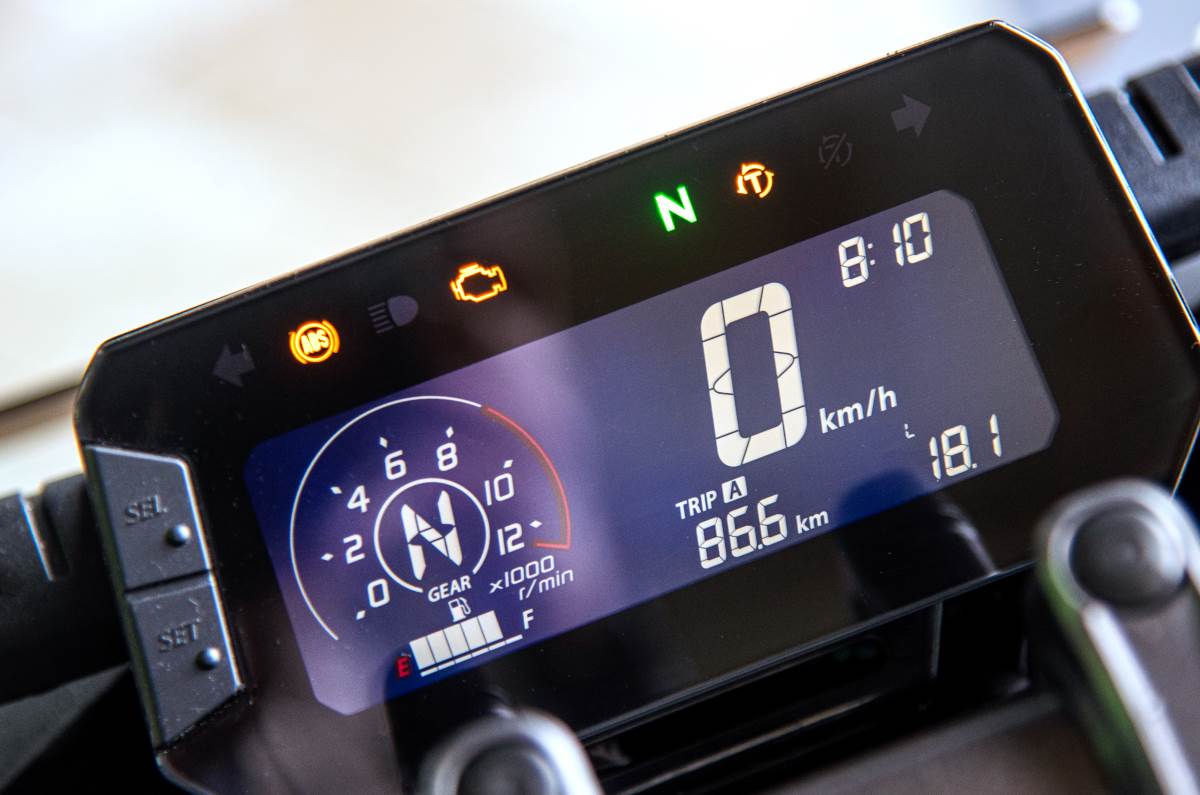 However, it certainly packs more features than a Hornet. The all-digital LCD instrument cluster includes Bluetooth on the top variant (the only difference between the two trims) and Honda also gives you all-LED lighting, USB Type-C charging, slip-assist clutch, dual-channel ABS and traction control. While the value of the latter is debatable, given the levels of performance on offer here, it’s still a nice security feature to have.

If Honda had reached its usual level of engine refinement, the CB300F would have been a decent bike for someone who wasn’t interested in having the sportiest experience in the middleweight segment. It has its share of positives: excellent road presence, comfortable seats and the fact that it’s light and easy to ride. With a smooth motor, it could have made a good big city bike. But once you factor in the price and see where it stands against its competition, this comes across as a pretty underwhelming bike.

For almost Rs 45,000 less, Suzuki offers you an excellent all-rounder in the form of the Gixxer 250, which feels just as fast, and yet much smoother. And if you’re looking for a true high-end streetfighter experience, the KTM 250 Duke only costs Rs 11,000 more, or you could even have something like the BMW G 310 R for less than Rs 40,000 more. The CB300F will be exclusively retailed through Honda’s BigWing network, and while only a longer drive will give us a full picture of this bike, our first impressions suggest those 100 or so dealerships across the country are going to have a bit of a hard time. sell on their hands.

Can innovative industrial properties survive the rest of 2022?