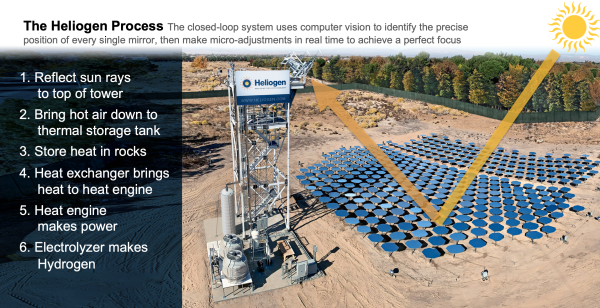 Hydrogen use is expected to increase from 115 million metric tonnes currently to 500-800 million metric tonnes per year by 2050, which represents 15-20 percent of total global energy demand. Already announced hydrogen projects represent more than $ 300 billion in spending across the value chain, and analysts at McKinsey & Company expect at least $ 150 billion of that spending to be linked. hydrogen production, which Heliogen and Bloom Energy are tackling as part of their collaboration.

The companies said their successful demonstration is an important step towards the goal of replacing fossil fuels with green hydrogen in commercial and industrial applications. Responsible for more than a third of global energy consumption and a quarter of global CO22 emissions, industrial companies are particularly well suited to low-cost, large-scale use of hydrogen given their high energy needs and significant carbon emissions.

Our demonstration project with Bloom Energy represents an important step towards the large-scale production of green hydrogen, which will play an important role in the decarbonization of heavy industry. Following this successful integration of Heliogen’s near 24/7 solar steam generation with the Bloom electrolyser, we anticipate that commercial projects will also use Heliogen technology to deliver their electrical power, providing 100 percent of the thermal and electrical energy required to produce green hydrogen. .

Heliogen and Bloom Energy plan to continue their testing efforts and look forward to sharing more information at a future date.