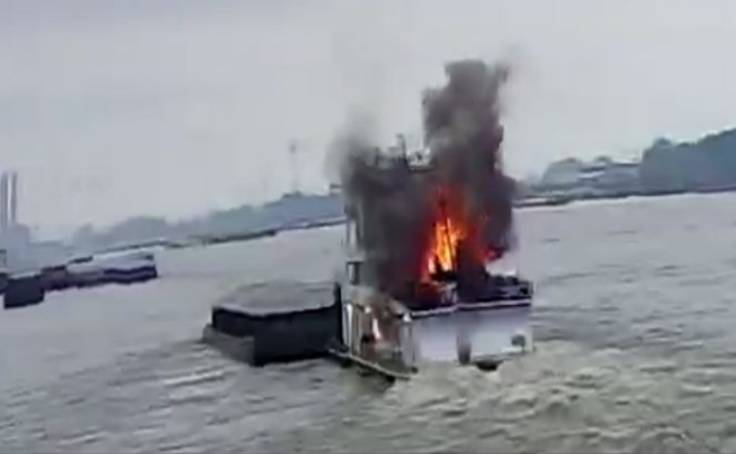 The engine room fire aboard a tug was caused by overpressure in the daytime fuel tank and a main engine fuel return system when a tired chief engineer inadvertently left the valves from day tank overflow to closed storage tanks, the National Transportation Safety Board said in Marine Investigation Report 22/17 released Wednesday.

On May 18, 2021, the tugboat Mary Lynn was pushing two barges near mile 176 on the upper Mississippi near St. Louis, Missouri when a fire broke out in the engine room. A Good Samaritan tug and a St. Louis Fire Department fireboat helped put out the blaze. No pollution or injuries to the six crew members were reported. The fire caused damage of more than $700,000.

The Mary Lynn docked at Gasconade Street Fleet after dropping off barges. The crew planned to take on board fuel, lubricating oil and potable water from a tugboat and a delivery barge. The delivery tug arrived approximately 2.5 hours early as the chief engineer was emptying the fuel storage tanks. While preparing for delivery, the chief engineer inadvertently left the overflow valves from the day tanks to the fuel storage tanks closed.

Almost immediately after the Mary Lynn sailed, the starboard main engine did not reach commanded rpm, and the captain returned the vessel to the ephemeral area to resolve the problem. While the chief engineer was troubleshooting, he opened the suction valves on one of the tug’s fuel storage tanks and started a fuel transfer pump, which had been shut down during refueling and n had not been restarted before departure, as was standard ship procedure. .

Approximately 13 minutes after the Mary Lynn was restarted, the chief engineer observed a fuel filter glass bowl pop out of the port main engine fuel manifold, causing the fuel to spray and ignite. The chief engineer evacuated the space. The ship lost electrical power soon after, and nearby Good Samaritan ships responded to provide firefighting efforts and towing assistance.

NTSB investigators also concluded that the chief engineer was likely affected by acute fatigue, as he said he slept less than five hours in the 24 hours preceding the fire. This fatigue likely had an impact on the chief engineer’s attention, memory, and performance of complex tasks.

The NTSB determined that the probable cause of the engine room fire aboard the Mary Lynn was over-pressurization of the daytime fuel tank (which did not have an independent vent) and a fuel return system. fuel from the main engine when the tired chief engineer inadvertently left the day tank. storage tank overflow valves closed, eventually leading to ignition of diesel fuel sprayed from a main engine fuel system onto an uninsulated engine component.

“Subchapter M regulations for tugs require vessels built after 2000 to have vents for each fuel tank,” the report said. atmospheric tank on an exposed deck. Tank venting is important to ensure that a misalignment of valves does not lead to overpressure or vacuum in a fuel tank. Operators should be aware of the provisions of their fuel tank venting system. On vessels without independent fuel day tank ventilation, it is essential to ensure correct valve position during transfer and operation of the fuel system.”