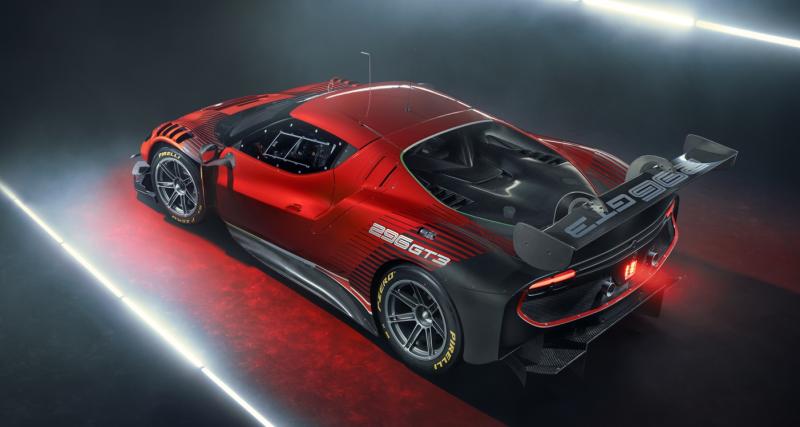 Zapping Autonews Which new LPG car to buy in 2022?

Aesthetically, we recognize the silhouette of the Ferrari 296 GTB. It is still decked out with numerous aerodynamic elements intended, of course, to improve performance in the race. The car adopts in particular a huge rear spoiler, side vents, a bonnet hollowed out by air intakes, new sills, a carbon fiber diffuser or fins on either side of its bumper. before. According to the Maranello firm, the 296 GT3 benefits from 20% additional downforce, compared to the model homologated for the road.

To hell with electrification

On the engine side, the 296 GT3 swaps the plug-in hybrid engine of its standard equivalent to adopt a 120-degree V6 3.0 turbo petrol engine, which develops no less than 600 horsepower. The torque is set at 710 Nm. This block is associated with a six-speed sequential gearbox. Performance data is not reported at this time.

Based on an aluminum chassis, the Ferrari 296 GT3 weighs only 1,250 kilos. It also sees its wheelbase lengthen to reach 2.66 meters. Ferrari says it installed an adjustable suspension system and upgraded the brakes with 400 millimeter discs up front. The car sits on 18-inch rims.

The steering wheel is reminiscent of Formula 1

As a sports model, Ferrari finally offers a specific interior for this 296 GT3. Sitting on a Sabelt seat, the driver holds in his hands a steering wheel covered with controls, inspired by the one that equips the F1. This steering wheel, like the pedals, can be adjusted to suit the driver. And just to suffer less from the heat in the race, an air conditioning system is even present.

Ferrari presents the new Ferrari 296 GT3, a racing car developed to participate in the most demanding endurance races in the world. This V6-powered model replaces the Ferrari 488 GT3 and its V8.